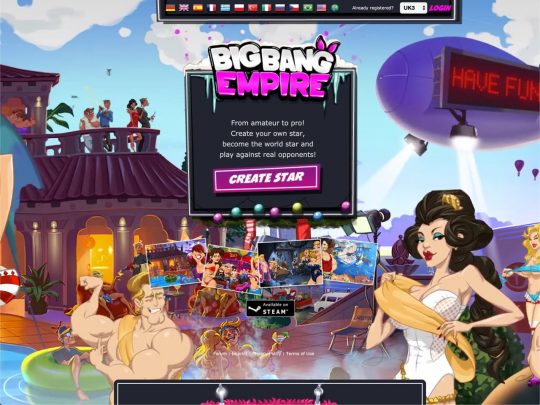 Big Bang Empire has nothing at all to do with the TV show it makes you think of. It’s the exact opposite. The game comes from the UK, so the creators may not be as aware of the similarity. The game itself is a lot of fun to play. You get to take on the role of a woman trying to break into the porn industry. You’ll start out stripping and have to work your way to the top. It’s an MMORPG, so you don’t have to play alone. You can play against other real players, or team up with them. The person with the most money and highest rated studio will be the winner.

You start out at the bottom on BigBangEmpire and make very little money. As you gain experience stripping, you’ll be able to hit up fancy clubs and parties. Make your connections and you’ll be able to use them to succeed. You can choose to start your own porn studio or join one that already exists. Then it will be on you to make the very best videos that you can. You have to outsell all of the competition to make your way to the top of the pile. All of this is done while you compete against other studios that are run by other players around the world.

The Big Bang Empire game is extremely heavy on memory, though. If you’re using an older system, you’re running the very real risk of it crashing. You’ll need a newer computer or mobile device to play the game. It require downloading an app if you want to play it on your phone. It works just as well as the browser version, though. The game takes some time to start winning, but it’s worth it if you like to build things up from nothing. There are clear goals and it’s all easy to understand quickly.

similar SITES LIKE Big Bang Empire BACK TO HOME