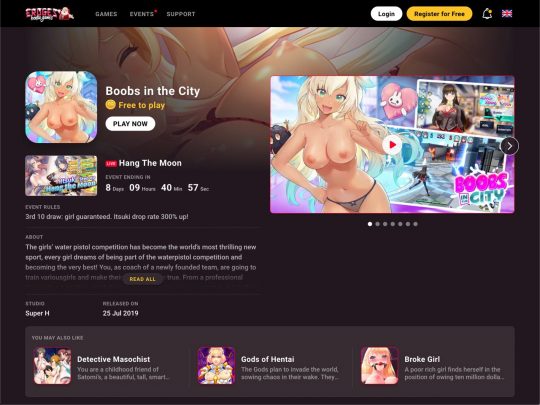 Boobs In The City

Boobs in the City is a really fun game that basically gives you two games in one. It’s free to play and comes on both desktop and mobile versions. Part of the game is a dating sim and the other part is a third-person shooter in the battle royal style. The artwork is great and there’s tons of nudity for you to unlock. You can also get plenty of sex scenes as you train your girls and unlock new levels of your relationship with them. The goal is to build up your team and lead them to victory in the water gun tournaments. They’ll also be spending plenty of time getting your own gun to shoot for them.

The Boobs In The City site which is hosted on Eroges.com also runs online events that you can join in whenever you want. They tend to last a long time, so you should have no problem finding out when they’re happening and attending. The game even features an online mode that you can play. You’ll be able to play against other people in the battle royal parts of the game. It’s a lot of fun and you can do it right from your phone. The game works well across all platforms, so all you’ll really need is a decent internet connection to get the most out of it.

The Boobs In The City game is designed for your browser and for your mobile device. It works just as well on either one. It just comes down to whether you prefer to play with a mouse or by tapping. The artwork is great and it’s easy to unlock new nude poses. The sex scenes are really where it’s at in this game. They definitely don’t hold back. It’s all uncensored, so you get to see everything. You don’t see actual sex scenes all that often and the ones you find here are worth registering your email address so you can join in on them.

similar SITES LIKE Boobs In The City BACK TO HOME