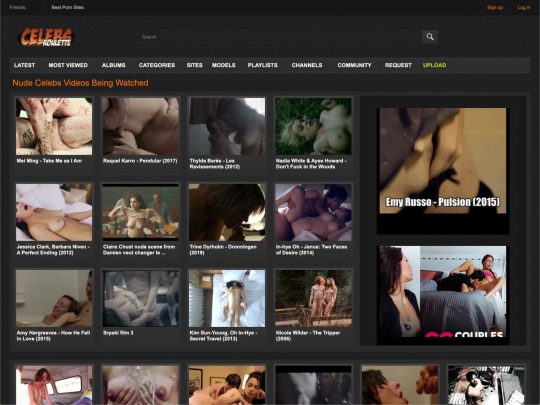 CelebsRoulette is a free site that’s filled with nude and sex scenes from movies and TV. There are thousands of unedited videos to watch that only show the good parts. Each one lets you know which celebrity is in and what the scene is from. You can search for a scene that you already know exists or you can search for a celebrity to see if they’ve been in any. There are new updates coming all of the time and new scenes get added right away. The only real problem is that the site isn’t always designed properly and some of the pages are missing all of their links.

The Nude and Sex Scenes in Cinema is the largest category on Celebs Roulette and has the most action. Movies let the actor show more and they always make sure to take advantage of it. They’re also planned well in advance and have the most detail. Some foreign language movies even have actual and explicit sex in them. You can see real penetration by the actors and the women always seem like they’re enjoying themselves. The quality varies a lot from video to video but that’s because of the variations in the movies themselves.

The CelebsRoulette site works well for the most part, except for the broken links. There are also a lot of annoying pop up ads and redirects to deal with. It’s all worth it to keep the site free, though. Nothing here costs anything. You can watch as much or as little as you want without ever having to buy a membership or a video. They also find really old movies to put up. If you want to find an older actress in a sex scene from when she was younger and more willing to get naked, you can find it right here.