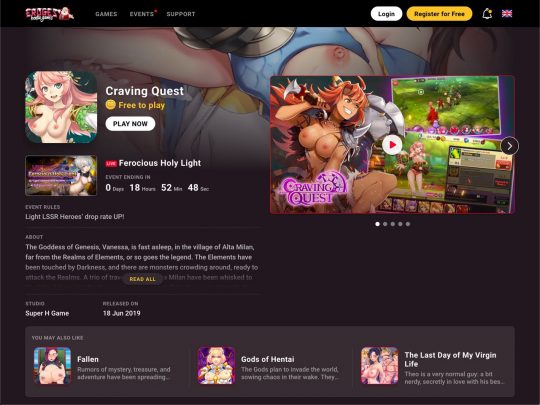 Craving Quest is a really fun game that lets you explore a fully fleshed out world with hot warriors who all have massive libidos. The game is totally uncensored so you can see everything that’s going on. The artwork is great and the girls are hot. There’s plenty of nudity as you make your way through it as well. The game doesn’t make you struggle and wait to get to the good stuff. The gameplay is simply designed around the nudity. You’ll be able to see the girls in the nude pretty early on, then you can unlock different poses and sex acts as you progress. It’s a great game for anyone who likes a lot of nudity in their games.

Playing Craving Quest is a lot of fun. You’re tasked with traveling the world to save it from destruction. You’ll be able to meet a whole lot of different species and races along the way. The game has everything from elves to mermaids and even hell hounds and robots. They really didn’t leave anything out while they were making it. You’ll be able to battle your way through soldiers and bosses until you meet the person who’s responsible for everything. You can choose whether you spend a battle attacking or on the defense. Winning depends on how well you’ve been leveling up your heroes.

The Eroges.com site which hosts Craving Quest works really well on your PC. There isn’t really any risk of it crashing or slowing down your browser. There isn’t a mobile-specific version of the game currently available. It was released pretty recently, so there will hopefully be one in the near future. The artwork is great and the gameplay is fun. It’s a turn-based strategy game where you can level up your heroes and your soldiers. The part you play in the battles is up to you at the beginning. It’s a really fun game with a massive world to explore.