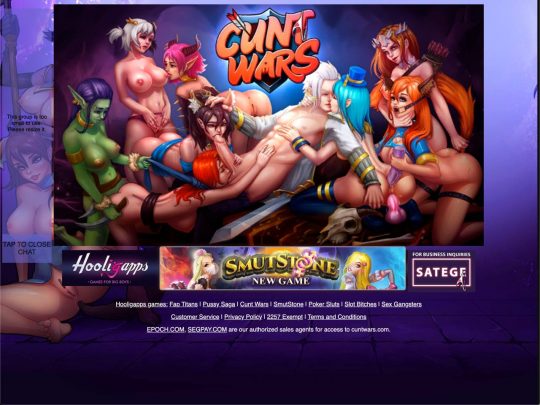 CuntWars is here to give you the turn-based sex game that you never knew you needed. It’s free to play and comes on both PCs and mobile devices. All you need is a browser to play it on your computer. You’ll have to download the app if you want to take it with you on your phone. It works on both Android and iOS, so everyone can get a chance to play it. The artwork is great and the storyline will keep you coming back until you win the entire thing. It’s no surprise that it’s been played by almost ten thousand people since it came out. You can rate it and let everyone else know what you think.

There’s a long introduction level for Cunt Wars to make sure you’re familiar with everything you’ll be doing. The gameplay is pretty simple. You want to be the greatest general in the land. In order to do that, you’ll need great lieutenants to fight your battles. It just so turns out that all of them happen to be hot and horny women. If you want them to fight for you, you’ll have to fuck them into submission. Each one comes with her own special powers on the battlefield. You’ll need to use all of them if you want to beat all of your enemies and win the day.

The CuntWars game works great, no matter where you’re playing it. It’s stable and you’ll never have a problem unless you’re on a really old browser. You can expect the game to not load without an update. Other than that, there shouldn’t be any issues. The app works great and keeps all of your data saved for you. You won’t open it up just to see that all of your progress is lost. It can keep you engaged for hours on end. The sex is great and the gameplay is worth the time you’ll put into it.