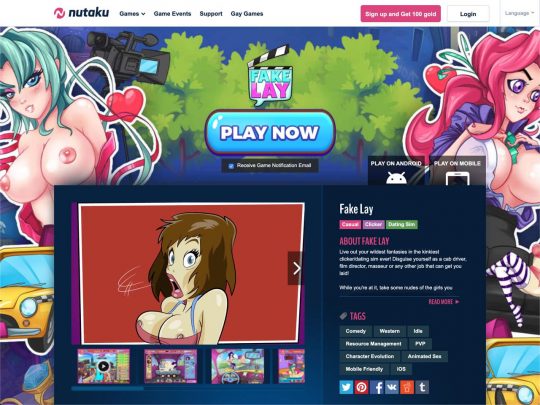 FakeLay is a game by Nutaku where you get to fake it until you make it with hot girls. You start out as a lowly cab driver who only wants to have sex. You’ll have to learn how to trick women into thinking that you’re a big porn producer. Once you do that, you’ll be able to record yourself having sex with them and sell the tapes. The game has been around for a few years and has a decent fan base. It takes a while to play, unless you want to start paying for power ups to get through the different levels. If you don’t, you’ll have to dedicate weeks to winning it.

The whole Fake Lay game is based around seducing women up to certain points. You’ll have to butter them up with small talk, as well as buy them gifts. Once you seduce them enough, you’ll be able to record sex scenes with them. They start out innocently with the girls just showing off in their clothes. Then they get progressively dirtier until you finally have sex with them. Then you can sell the tapes to make money and seduce the next girl. It can be difficult to figure out what’s going on at first, but then you can get the hang of it and play to win.

FakeLay works well on all browsers. There’s no mobile app for it, so that’s your only option. You’ll spend most of your time waiting for your skills to increase. They can range anywhere from hours to days. You’ll need them in order to seduce the girls. It’s not a game that you can just play for a few hours and beat. You’ll have to invest the time to let the game play itself out. If you enjoy something that can take up a whole lot of your free time, then you’ll enjoy it.