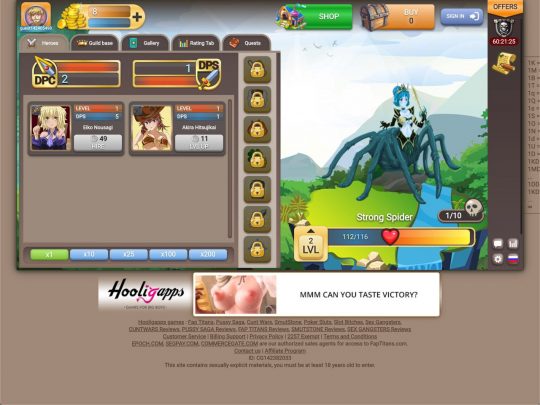 Fap Titans is a clicker game that lets you defeat monsters before they can take over the world. You’re on the front line and you have to click them until they die and drop a nice sack of money to use. You’ll only be joined by your harem of female warriors. They all come with their own abilities and will make defeating the monsters easier and easier. Use the money they drop to upgrade your army to the point where all you have to do is sit back and let the battles fight themselves. Naturally, you’ll have plenty of time to have sex with your soldiers in between the battles to keep morale high.

The FapTitans game is incredibly easy and simple to understand. It’s a run of the mill clicker game that takes care of itself after a few upgrades. The real reason to play it is to see the hot anime girls. You can unlock specific scenes with them to get everything the game has to offer you. Each girl has her own unique scene that you can watch over and over again. The game doesn’t bog you down with management of lore. You just point your browser and start playing it. It’s a great way to pass the time with a little cartoon nudity.

Fap Titans works well and you can play it through your browser. It’s very light on the system and runs well through flash. You shouldn’t expect to run into any problems with it. It’s also completely free to play. You’ll need an account to save your data, but that’s about it. None of the features are kept behind paywalls. You get it all to enjoy whenever you want. It’s worth a look to see if it’s for you. As long as you’re into clicker games, you’ll be able to have a lot of fun with it and keep coming back.