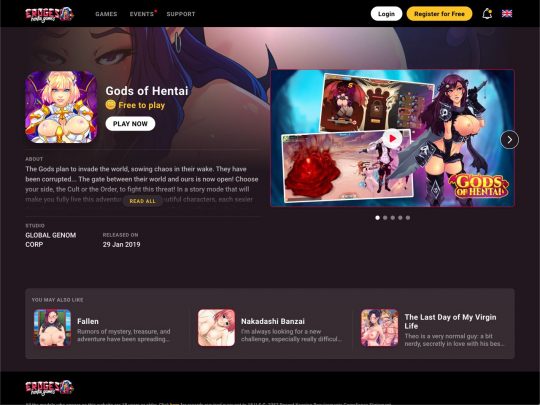 Gods of Hentai is a fun game for anyone who wants to see hot girls in skimpy warrior outfits. The goal is to go around and beat other characters in combat. Once you beat them, you get panties. Then you can take the panties and use them to recruit other warriors. Each warrior comes with their own traits that you can use in future battles. It’s a role playing game that gives you an eyeful of naked boobs every few minutes. Once you get to know the people fighting with you, you’ll be able to have sex with them whenever you want. GodsofHentai is a fun way to spend your time and it doesn’t take much to learn how to play it.

Gods of Hentai is easy on your system and you can play it right through your browser. It’s not currently available through an app. There are also a lot of ads to deal with. You’re constantly given the ability to buy things in the game. They’ll speed you along your way, but you can get there just by playing. It’s pretty standard stuff for any free game out there. It’s great if you want to spend a little time learning about a fun lore and seeing naked boobs. Collect all the panties you can and build the greatest army in the land.