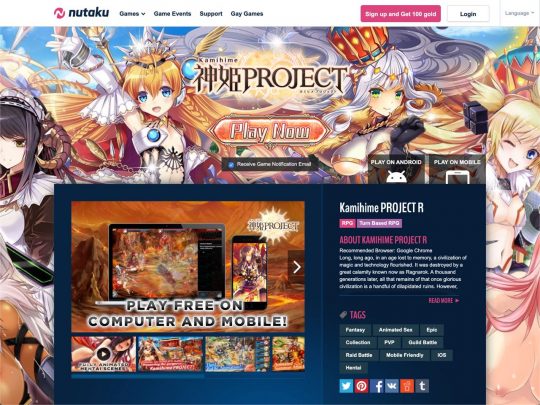 Kamihime Project R is a huge hentai game that brings you on a journey to save the world. The kingdom of magic was thought to be destroyed long ago. It’s not even a memory in the modern-day until you fall into it. You’ve awakened an ancient soul and it’s now your duty to save the kingdom and save the universe from total destruction. You’ll have to recruit the most powerful soldiers you can and unlock all of their abilities to win. It doesn’t really hurt that the best way to unlock those abilities is by having sex with them as much as you possibly can. All of reality is resting your ability to fuck.

It’s an adventure game with turn-based fighting. You’ll have to manage all of your different soldiers and bring them in when they can be of the most help. You’ll also have to manage their abilities. Simply using them won’t help you to win. You’ll have to choose the best attacks and defenses that you can if you want to win the day. All of your soldiers also happen to be horny virgins who take a liking to you and your strange ways. You’ll have to join with each of them through the power of sex if you want to win.

The Kamihime Project R game works really well and you’ll need an account to play it. Your progress will be automatically saved and that’s a very good thing. This game takes a long time to play. There’s a lot to explore and tons of soldiers to recruit. There’s also a massive backstory that you read whenever you want. It’s best to brush up on it because it’s not presented in the game. You’ll need to reference the index to get all of the information that you need. If you want a really immersive game that goes on and on, then you’ll love this one.

similar SITES LIKE Kamihime Project R BACK TO HOME