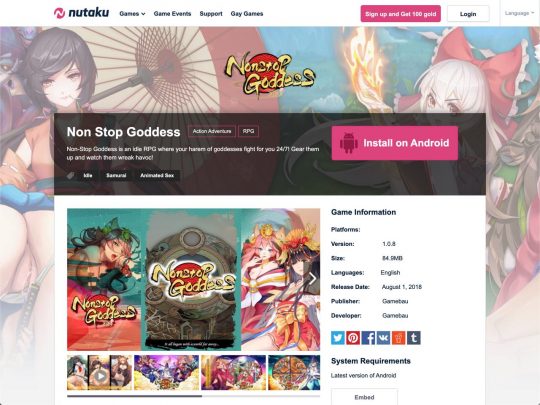 Nonstop Goddess lets you explore Japan in a time when demons and humans coexisted. As the landscape becomes more and more hellish, the balance between the two comes into jeopardy. It’s your job to beat the demons back and make the world safe for all humans to inhabit it alone. You’ll need a lot of help from your friends. It doesn’t hurt that they all happens to be sexy and horny anime girls who are just a few words away from having sex with you. Get to know them and talk to them as much as you can. It means the difference between fighting alone and fighting before sex.

The Non Stop Goddess game on Nutaku’s site works really well on any browser. You can also get it for your android device. All you have to do is register an email address to play it. You’ll have access to all of the same features on either platform. There is currently no version designed for any iOS device. Updates and fixes are being released all of the time. If you run into any problems, you can rest assured that it will be taken care of soon. It’s a great game for anyone who loves animated sex scenes with really hot and sexy anime girls.

similar SITES LIKE Non Stop Goddess BACK TO HOME