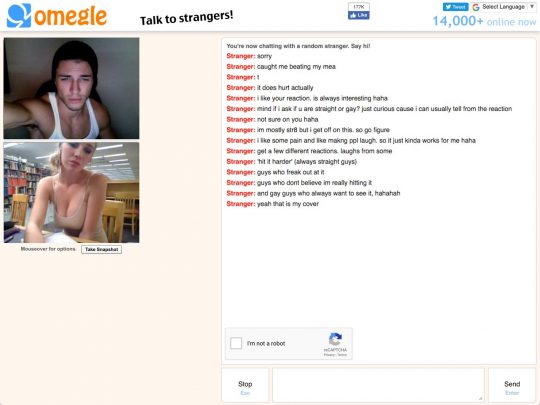 Omegle is an anonymous cam site that offers random chatting with strangers. People are selected at random for you to chat with, the conversations are one-on-one, and if you want to skip and move on to another person, it is easy to do. This is a version of chat roulette, and you can stop any conversation at any time. The chat allows users of most ages, so it is not a top place to have naughty fun and to be naked all the time. Put some clothes on, chat with people, and be careful.

Omegle.com offers the ability to add interests, making it easier to find people who are randomized but also are interested in some of the same things that you are. The site was launched in 2009 and became popular very quickly. Within a month after its launch, the site had over 150,000 pageviews per day. Shortly after, Omegle added a video conferencing feature. The site is used by people on their phones, tablets, and computers.

In its beginnings, Omegle was a text-only chat that randomly paired users to talk with others at random. When the video mode was introduced, it was a compliment to the text chat mode and allowed people to see each other as well. Two thousand eleven brought in a “Spy Mode” which allows a person to be a spy and ask questions of two strangers, or to discuss a question with another stranger. This gives a lot of options for interaction that is semi-directed, making it easier to find subject matter and start conversations.

The site Omegle now features “monitored” video chat, which is designed to protect people under 18 from nudity and sexual content. It is said that this is not fully effective, however. The website also offers a video chat that is not monitored for sexual content.