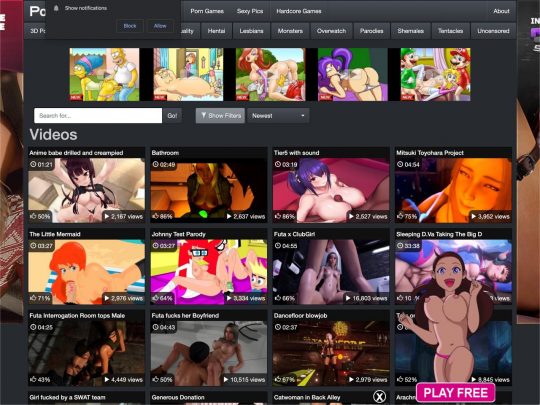 PoreCore can be a lot of fun if your system can handle this memory glutton of a site. It’s filled with original works from independent artists that you can watch for free. There are no downloads, but you don’t need an account to check anything out. There are a lot of videos that run anywhere from a sex seconds to almost an hour. It’s a great place to check out if you really like to watch cartoons having sex. You just need a system that can actually deal with all of the ads they throw at you. There’s a real chance that this site will freeze your system and make you reboot your entire computer.

The Parody category is a lot of fun to check out. The creators take pop culture characters and put them in scenes of sexy filled fun. There are a lot of them and you can pretty much find any character that you want. When you can see Harley Quinn having sex with Batgirl right next to a video of Ariel giving a blowjob, you know you’re in a good place for parodies. They’re all original and the artists spend a lot of time making the characters look like the originals. You’ll find animations as well as 3D renderings of anyone you want.

The problem here is with the Porcore site itself. It’s filled with redirects and pop ups. There are also animated sidebar ads on every single page that just eat up your memory. If you open up a category, the site is going to want to load tons and tons of thumbnails with each serving as a preview of the video. That’s when your system is ready to just give up and freeze on you. It won’t just freeze your browser, though. You’re running the risk of having to reboot your entire computer. It’s trying to open pop up ads while rendering dozens of preview at the same time. It can be a real hazard.