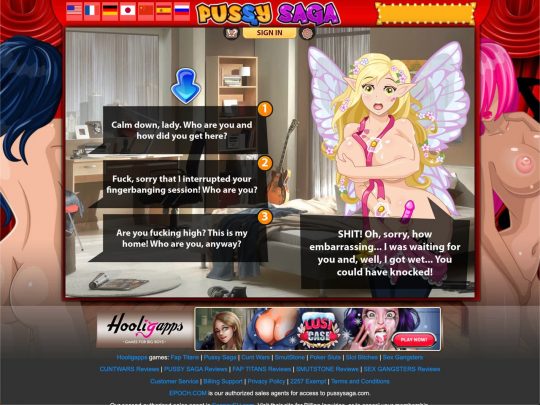 PussySaga starts off with your walking in on a nympho fairy pleasuring herself on your bed. If there’s any better way to start a game, no one’s found it yet. It’s a fun way to pass the time and it doesn’t take a whole lot of brain power to play. It’s a simple and straight forward way to get your hentai while you’re out and about. You’ll never have to worry about awkward sounds or being bombarded by nudity if you’re not playing alone. You’ll still get the naked anime girls, but they won’t be coming every few seconds like on other adult games. That makes it great to play when you’re on the go.

The Pussy Saga game works really well and is super light on your system. It’s an easy flash game to run on your computer or on your phone. The only problem comes if you step away from it for too long. The game will time out and you’ll have to reload it if you want to keep playing. It’s only a real problem if you want to keep it open in a tab while you do other things. All in all, it’s a fun game that gives you plenty of hentai nudity as you make your way through the game boards.