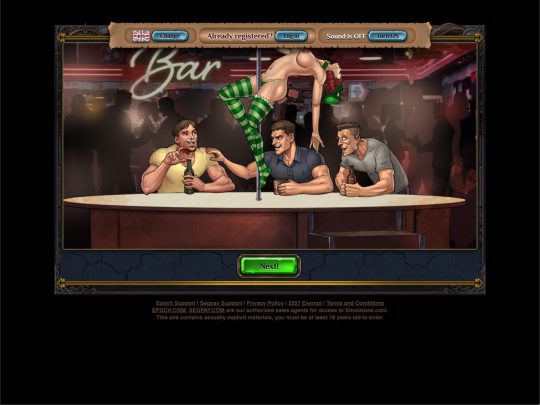 SmutStone is a really fun card game if you’ve always wanted to mix Hearthstone with Disney and add fucking. Most of the characters you come across have a lot in common with Disney counterparts. One of the heroines is even named Snow White. The gameplay itself is very much the same as Hearthstone. None of that is really a problem when you see just how great the artwork is here. The women are gorgeous and you get a chance to see them totally naked as you make your way through the game. You’ll also be able to follow along with a story that shows you just how fun this alternate reality can really be.

Smut Stone is all based around cards, so you have to be into them if you want to enjoy the game. It starts when you get sucked into another universe after a one night stand with a stripper. Then you’re off to save the world by building your deck and defeating your enemies. The best part of the game is the audio. There’s no dialogue, but you can hear realistic sounds of hot girls fighting. It adds a whole new layer to the game and really makes you want to play it with the sound all the way up. It’s definitely not a game for you to play out in public.

The SmutStone game works well and you can get it on your PC or mobile device. It’s also completely free to play. The card game itself is very easy to understand. You won’t have to spend hours trying to understand it. That doesn’t mean that the game isn’t involved, though. You’ll still be able to dedicate all of your free time to mastering it and winning. It’s worth a look if you’re into games like Magic. There aren’t a whole lot of sex animations, but the artwork is sure to keep you coming back for more.