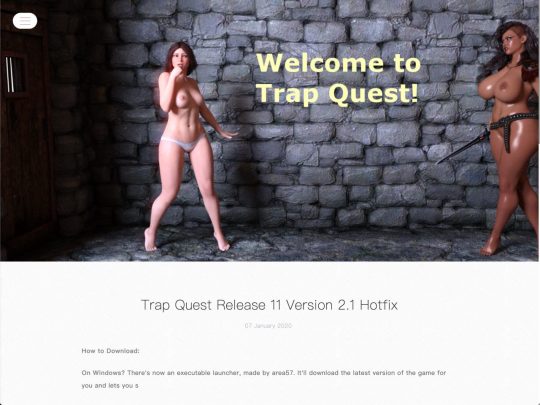 TrapQuest is a really fun game that scratches an itch that not many others do. The entire thing revolves around sissification and you get to be the guy sissified. You’re trapped in a dungeon and it’s your job to make your way around and try to escape. That doesn’t mean that it will happen, though. The game is all text based and you can choose your actions from a list. The graphics are a lot of fun and there was clearly a good amount of effort put into the character models. The girls are hot and they’re always out to get you.

The goal of the TrapQuest game is essentially to lose, but they don’t make it easy. If you want to have fun with it, then you have to play to win. No matter how hard you fight, it’s only going to end after you’ve been turned into a woman. That’s the whole niche behind the game. You’ll be pegged, whipped, humiliated and beaten, all while you start growing breasts and getting larger hips. You’re a full-fledged woman at the end of it and there’s a very good chance that you’ll also be pregnant. The game is nothing if not deeply entrenched in its fetish.

TrapQuest works really well on any newer system. You might have some problems with an older computer. It only exists as an application, so you’ll have to download and install it on your computer. All of the saved data will be on your system so you know it won’t be going anywhere. The renderings look great and the women are stylized and a lot of fun to look at. It’s a great game for anyone who’s into bimbofication or sissification and is looking for a way to play with the fetish.