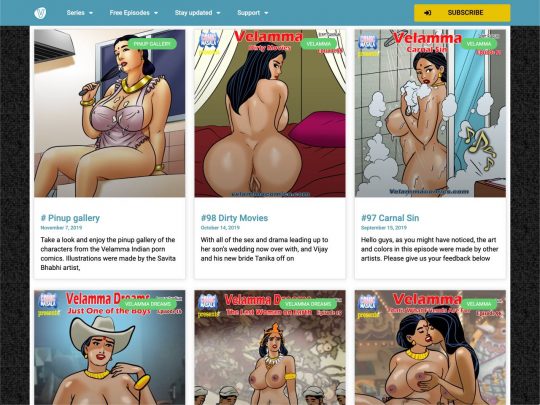 VelammaComics is a site featuring two main characters. One is named Velamma and the other is named Veena. They’re both set in India and created by an Indian artist. The archive is huge and the series have been running for a very long time. In all, there are three of them. One for each character and one dedicated to Velamma’s dreams. The storylines are great and have a ton of sex and sexual situations in them. The artwork is pretty simple and whether or not you like it depends on your taste. The same style is present in every comic and isn’t going to be going anywhere.

The Veena series on Velamma Comics is a really fun take on single life in a big city. It follows her was she tries to make her way in the world but always ends up trading her body for something. One of the episodes, for instance, has her looking for a new apartment. She finds one that she likes and can afford the monthly payments. Unfortunately, the landlord wants a large deposit before she can have it. Desperate and unable to cover it, she does the only thing she can think of. She has sex with the landlord and enters into an ongoing sexual agreement in exchange for the apartment. It’s a lot of fun.

The VelammaComics site works very well and is easy on any system. It’s very simply designed and works as a great way to get your comic books. There are new updates all of the time and there are a few free episode to check everything out. You’re free to both read them online and download to keep. It’s perfect for anyone who wants a new kind of adult comic to read. The setting and characters are well outside of the mainstream and the fun they get into is always hot.