The biggest issue with this site is its user interface– though, this can occasionally be a bigger issue than it might otherwise seem. While we might think of the user interface as a superficial factor, it ultimately plays a huge role in how you navigate a web page and can stop you dead in your tracks if it’s too poor.

Thankfully, Whoreshub does everything else better than average (and almost amazingly if it weren’t for a few hiccups here and there). As such, while there might be moments when Whoreshub’s user interface causes functional problems, it shouldn’t be too much of an issue in most instances. 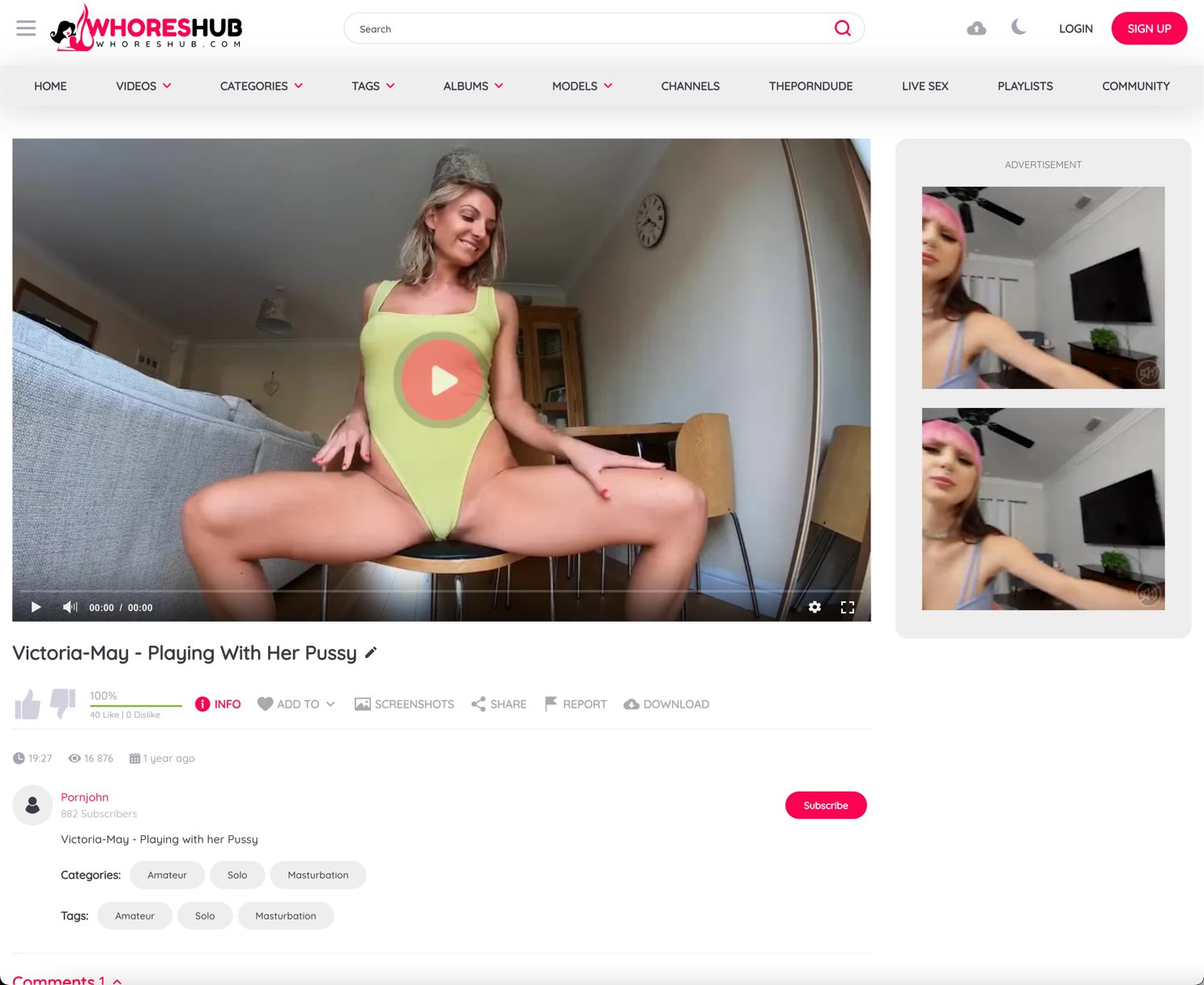 Unfortunately for Whoreshub, this worst-case scenario is exactly what the site deals with, though it’s not a total loss. To start it off, Whoreshub makes the easiest mistake to fix by using a bright, white background that can blind users who generally surf the internet in dark mode– though, this is more of an issue with comfort than anything else.

On a positive note, even though the homepage is a bit messy with numerous navigation bars and video groupings, it, at least, uses the page format instead of the infinite page scroll. That said, the page function seems to be broken as you can only browse through so many pages before the site gets stuck and won’t progress further. 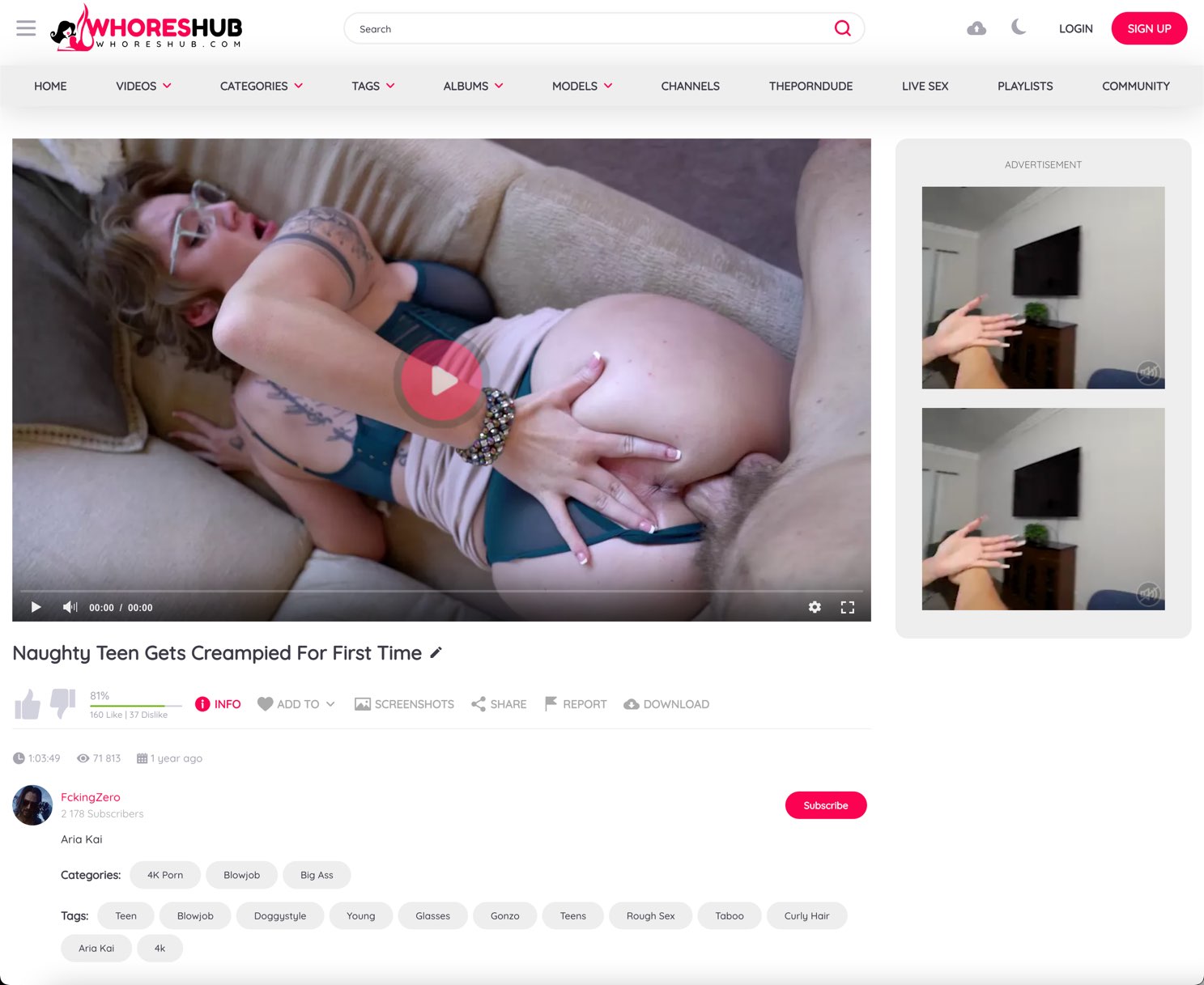 For starters, Whoreshub provides a categories page with dozens of different categories, with everything from common categories to those less common. On top of that, you can also do a deeper dive, if you like, into Whoreshub’s “tags” page, which is similar to categories but will often include even more specific terms.

As you would expect from a good indexing system, you can find both the tags and categories linked on the individual videos’ pages as well. The only thing holding this aspect from being perfect is that the videos contain no model link– though, Whoreshub boasts a large “models” page as well.

By all accounts, it appears as though Whoreshub boasts a large catalog of content– especially considering that the site has only been in operation for a little more than a year. Unfortunately, there’s currently no way to verify the size of the site’s catalog as the user interface’s page function craps out after about forty or so pages in. 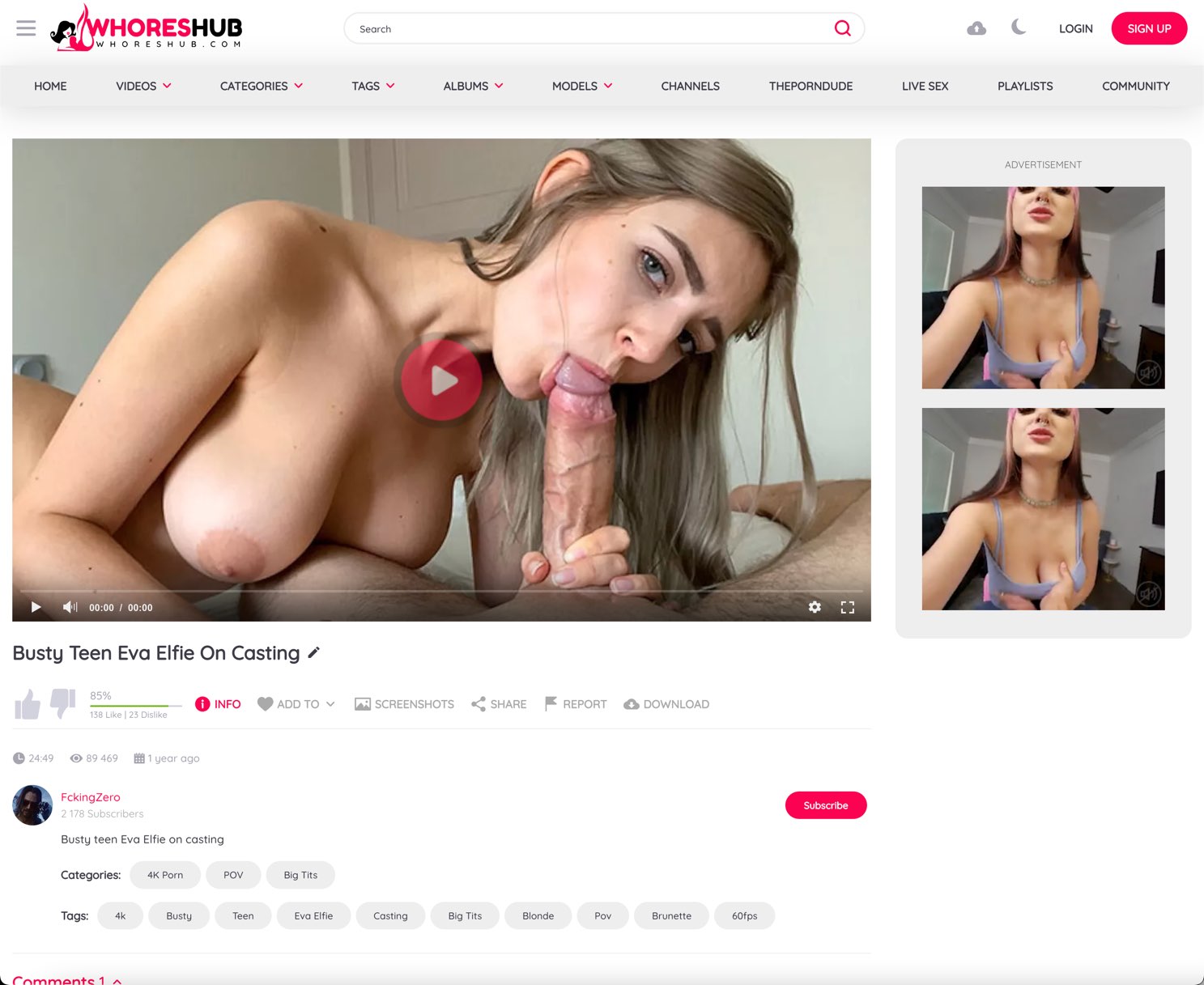 Keep in mind that you can page through Whoreshub’s catalog in a wide variety of different ways, choosing to order by release date, popularity, and others. And, while the page function issue pops up with all of them, they also provide different videos. This suggests that Whoreshub’s catalog is fairly large, relatively speaking.

It’s also worth considering that, based on the fact that Whoreshub sources a significant portion of its content from user uploads, its catalog is only going to keep growing. Hopefully, Whoreshub can sort out its page functionality on the backend, so you can more easily browse and watch its large catalog…

Regardless of how many videos sit in Whoreshub’s back catalog, one thing the site can hang its content hat on is the quality of the videos. Remember that Whoreshub doesn’t have a small catalog, but it’s certainly not as large as sites that have been around for over a decade. But, pretty much every video on Whoreshub is high-quality.

On top of that, if a major studio produced the video, then Whoreshub almost certainly provides the full-length version of that movie instead of a shortened clip. As a final cherry to top everything off, it seems like most of Whoreshub’s videos play in some form of HD resolution– with many of them playing in 1080p (as opposed to only 720p like a lot of other “HD” videos on different sites).

There are no major problems here, but, because the page system craps out after about three or dozen pages, Whoreshub’s catalog may be much thinner than it appears. Granted, it would still take months of regular visits to figure that out, but the possibility remains until disproved.

For starters, and as mentioned, an overwhelming majority of the new videos (and even large chunks of the older uploads) play in some form of HD resolution. Even better, Whoreshub’s video player includes tools that allow you to adjust the resolution to best suit your combination of taste and hardware capabilities.

That said, extra features on a video player are nice, but that’s not really what brings home the bacon. In this instance, the real breadwinner is Whoreshub’s rock-solid connectivity. Whether using a mouse or keyboard controls, paused or playing, at the edge of preload or not, nothing presented any serious problems during stress testing.
Quite simply, these videos never crashed nor did they even fall into an endless loading loop.

Consider also that, while the user interface might be somewhat uncomfortable, Whoreshub’s great indexing system means you shouldn’t have to worry about finding what you want. Though you may have to spend a little more time than you might elsewhere to do so– but it’s there, and you can find it.

Regardless, it’s Whoreshub’s potent one-two combo of full-length video from major studios starring professional models and great connectivity that shine. Outside of maybe waiting a few seconds for the player to catch up, there doesn’t seem to be any hitch with either of these factors that will keep you coming back for more.